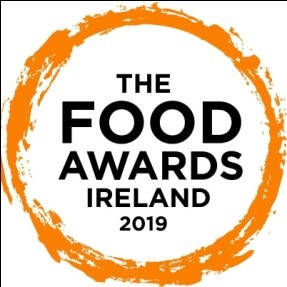 The Food Awards Ireland 2019 welcomed over 300 guests at The Crowne Plaza Hotel Dublin Airport on Monday, November 4th in an annual celebration of those who work hard to provide us with delicious dishes and unique experiences when we visit their establishments.

The awards recognised the achievements of local suppliers, wholesalers, chefs and restaurants amongst others that always serve the community with the freshest of products and work tirelessly within their establishments to deliver great customer service to their diners. The winners are a true reflection of the quality and excellence that remark the country’s food industry.

Gigi’s Restaurant at the G Hotel won Best Hotel Restaurant of the Year.

John Keogh’s  of the Westend won Best gastropub in Connacht.

Commenting on their recent win, owner of Tuco’s Taqueria Aonghus O Flaherty said “It’s an honour to be even shortlisted alongside some of the biggest names in the business, but to win it is simply incredible. We opened on Abbeygate Street just 4 years ago and since then have opened a second outlet Sligo but we’re still a small player compared to the other nominees. I’m so proud to be bringing this back west, where I believe we have the best Mexican food in the country. Competition has become intense lately, which is really good for the category and the city  – it pushes you to keep pushing standards higher”

“The awards celebrated everything related to food and provided a platform to thank those who have dedicated their whole career in providing us with great gastronomic delights. They also showcased amazing professionals that take our taste buds around the world by serving from Mexican and Italian to Oriental and the best of the East.